To Set The Stage

While planning to write the initial blog about the Druzhba 78 team, I was recollecting the experience of watching the team play. What I saw was do different and so amazing that there are certain memories and images seared into my brain.

The bench management was highly unusual to say the least. The lone coach, Ivan Pavilov, for the most part stood in the middle behind the bench although occasionally he would move to the end where players were coming off the ice to give a player crap for something. All of the players leaving the ice after a shift come onto the bench from the defense side and it was the spare goalie that opened the bench gate for them. All players going on to the ice left the bench from the offense side gate and the first player would open the bench gate.

The team frequently changed on the fly not just waiting for a stoppage in play. When changing on the fly players leaving the ice were skating so hard to the bench that by the end of the period snow was piled high up the boards at the defense side of the bench from their hard stops (by the way, this is not an exaggeration). From time to time just one player would leave the ice and change on the fly and this would happen at what seemed like odd times. In one instance I saw a player change in the middle of a power play in the middle of a prolonged time of control of the puck in the other teams end. I could never figure out why that change was made.

There was a lot more that is seared into my brain; mainly their amazing stick handling and puck control. There was also the typical “Russian” puck control style of game. They were like the Harlem Globetrotters of hockey. They just never gave up the puck.

One More Thing That Amazed Me

And Then The Surprise

The size of the players on the Druzhba team was all over the place; although they were all the same age, they ranged from very tall to very small.

There was one diminutive player by the name of Anatoliy Buliga that was just amazing with his skating and puck handling skills. On an offensive play, he could go into the corner with the puck and have 2 or 3 of the opposition try to take the puck away against the boards and yet somehow he would come out of the corner with the puck. He was given the nickname Anatoliy “The Magician”. 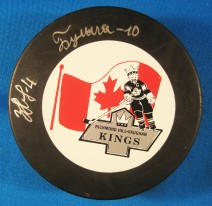 As written in a previous blog, the Richmond Hill – Vaughan hockey association arranged for an exhibition game with Druzhba 78. Now this exhibition game was played against a put together all-star team of players from Richmond Hill – Vaughan and their players were at least a year older than the Druzhba team. Also, the Druzhba team was in the middle of a tournament and had played earlier in the day. It was at the exhibition game that my sons were in awe and inspired by the skill of Anatoliy Buliga. The hockey association was selling memorabilia to raise money. We bought a hockey puck signed by Buliga and I still have the puck to this day.

In prepping for the initial blog, I used the ‘Google Machine” to check the spelling of Buliga’s name. God bless the “Google Machine” because I came up with a number of links to sites for Anatoliy. It looked like he was still involved in hockey and was operating as a skills instructor. I found sites linked to hockey instruction in Europe however there were sites that were linked to hockey training near Detroit Michigan. The thought struck me right away that it would be great to talk to him and maybe get a chance to meet him. I tried calling phone numbers on some of the sites but they were no longer active.

Some of the site had links to Facebook pages so I looked them up and sent messages to the pages. Surprisingly I received a response from one of the pages. After a bit of writing back and forth as to what my request was all about, I was advised that the he had been in contact with Anatoliy and I was given his cell number and told I could reach out to him any time.

Well, I really couldn’t wait so I called right away and Anatoliy answered. He was in some swimming pool area where his son was training as a competitive swimmer. We spoke for quite a while and he said he was coaching with the Detroit Little Caesar’s  hockey organization. He said in all likelihood the team he coached would be entering a tournament in Ontario in August or September as a warm-up for their upcoming season. He said he didn’t know the schedule or where the would play yet but he would let me know so the we could get together.

If you’re new to this blog and reading it from Facebook or Twitter, make sure to click on the BLOG/NEWS link in the menu at the top of the page and scroll down to read previous blogs on this and other subjects.